I had no idea vacuuming could be this much fun! After one full day of initial charge, I used my iRobot Roomba 4230 Remote Scheduler Robotic Vacuum

for the very first time this afternoon. This thing is so amusing that both BooBoo and I couldn’t help ourselves but followed it around all over the house.

It is like watching a very stubborn blind man, who tries to earn his keep in your house and would not stop at anything. Every time it bumps into an object, a wall, a foot… it turns slightly toward a different angle, going over and over through every part of the floor. It picked up all the kitty hair! The most shocking thing is Roomba found its own way back to the charger, and docked itself, and there the shimmering charging red light appeared… almost in a creepy way

Roomba was on my shopping list on Amazon for more than a year, I canâ€™t believe I didnâ€™t get it sooner!

Update: hmm, there is a newer & improved model since September 2007, darn… 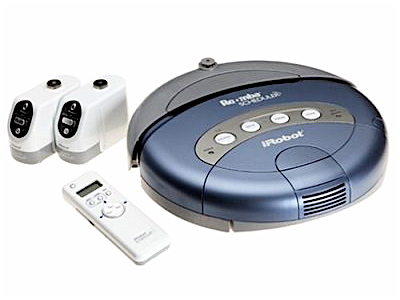