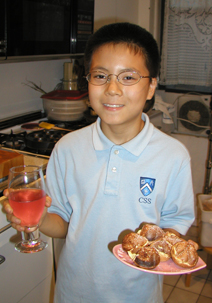 Saw the Danish Ebelskiver Iron on Williams-Sonomaâ€™s catalogue, thought of the red (Adzuki) bean paste stuffed pancake I was so fond of as a child, I knew I had to have it.

I guess there is a version of it in every culture… whatever sweet treat it is stuffed with, it is delicious!

Made dorayaki for Ryota yesterday, he has become a very mature looking kid over his summer vocation in Japan. His Chopin F minor Etude Op. 25-2 is sounding fantastic now, I think we will put it on his podcast soon

Just found this on YouTube, I am ordering a Taiyaki Maker

, which does not effect the blood sugar), grain mill to ground fresh organic whole soft wheat for flour, and Ebelskiver Iron.